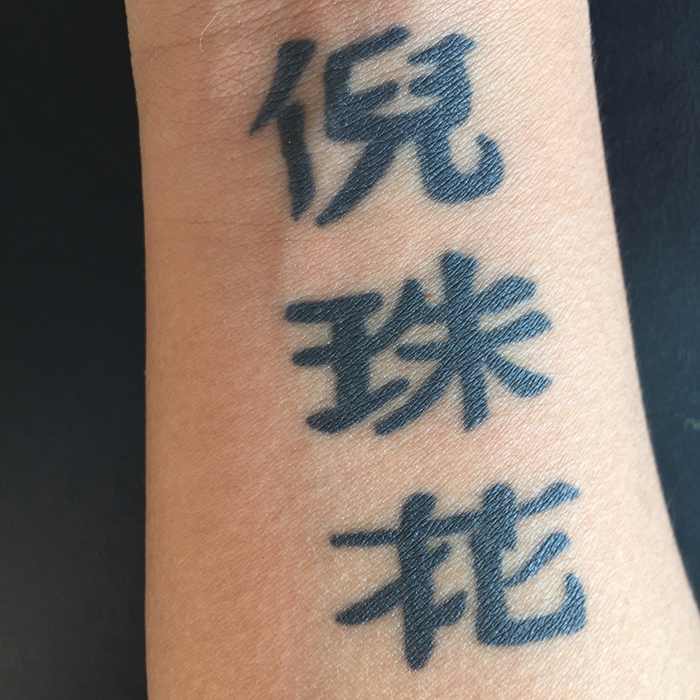 My name is Ivy and my intro to Our China Stories is not like everybody else's story. It's an original, unique and one of a kind story.

My story is a living testimony of hope and unconditional love. The reason I purposely chose to put my China adoption story out there for the public to see online is because I want to emphasize how important love is. Most people assume that love is just a feeling. But in reality, love is more than just a feeling. Love is sacrifice. Love is giving a piece of yourself that is sacred and letting it go for somebody else to enjoy. 1 Corinthians 13:4-7 says,  Love is patient, love is kind. It does not envy, it does not boast, it is not proud. It does not dishonor others, it is not self-seeking, it is not easily angered, it keeps no record of wrongs. Love does not delight in evil but rejoices with the truth. It always protects, always trusts, always hopes, always perseveres. In other words, God is love.

If you ever have seen The Little House On The Prairie, by Laura Ingalls Wilder, you would know exactly what I am talking about. It speaks volumes of what actual love is. Adoption is also love. Believe it or not, adopting a child from a foreign country is unconditional love. Not only are you taking that child in but you are raising this child as your very own. This is what real unconditional love is. And that's what I hope people learn from my adoption story. 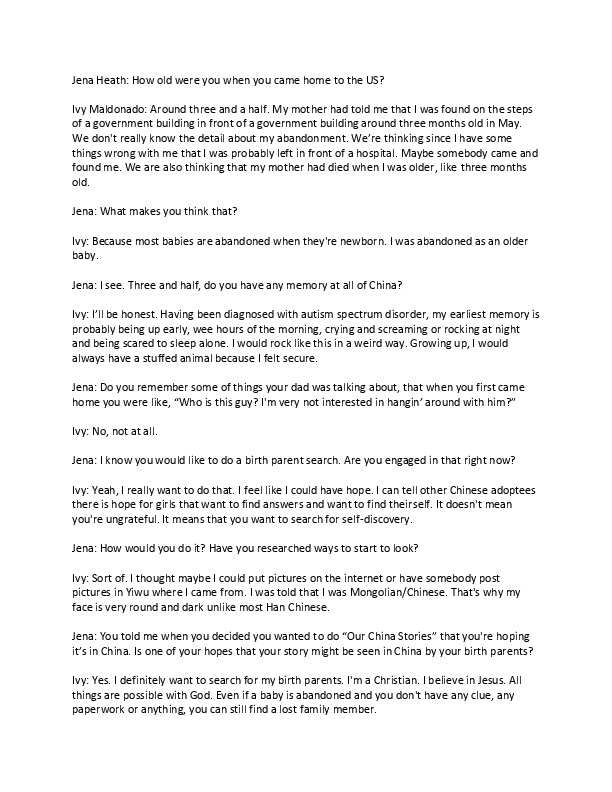 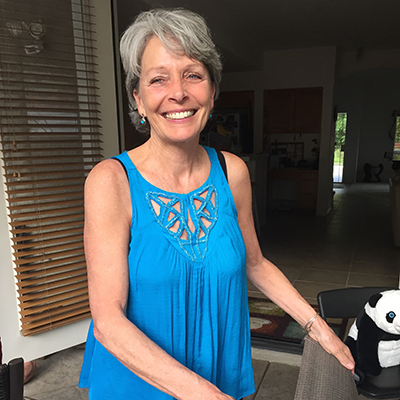 Whenever someone finds out I have adopted, I think they are surprised by what I choose to share.

I don't talk about issues a family struggles with when one of their children is of a different race. don't focus on the disability my adopted child has and how that has impacted the family. I do like to share the experience of loving an adopted child as much as I do my biological child.

That was my initial fear when my husband and I first started talking about adoption. ould I love someone else's child as much as I loved my son? I made a bargain with God. would give this beautiful Chinese orphan a home and raise her as my own, but I wanted Him to promise me that I would love her as much as I did Eli. ell, I kept my end of the bargain and so did God. Love knows no boundaries and God is faithful!

Adopted families go through many different trials as they learn to love each other and ork toward each other's best interests. Our family is no different. I understand that most adopted children have feelings of deep loss. ur daughter will have to carry around this grief of not having known her birth parents for, most likely, her whole life. But having a child from a different race was an additional burden for our daughter. ecause she did not look like us, whenever we were out in public, she might as well have carried around a sign on her forehead that said I am adopted. Unfortunately, well meaning people thought Ivy should be reminded at how thankful she should be for having a home. t was really us that were so blessed.

Having a child with a disability brings in a whole new dynamic to the family relationship. ith us, it forced us to understand what it is to love unconditionally. It taught us perseverance, but we also experienced loneliness. here were many times when we felt like it was us against the world.

Adopting Ivy has brought a depth and strength to our family and reminded us every day what is truly important - how we love each other. 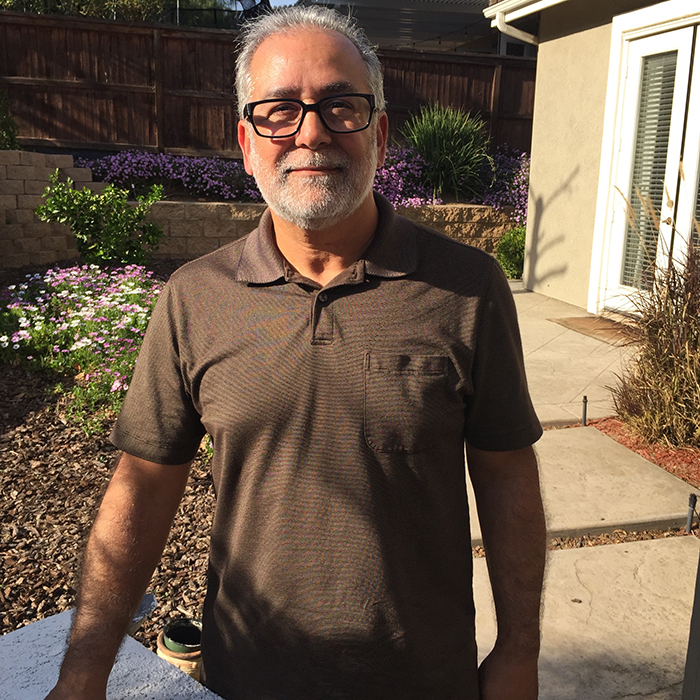 Adoption! he word itself can be intimidating and, when you think about it, is a monumental journey to take on.

The adoption process itself was not very difficult; many countries were offering adoption opportunities. he mystery of adopting from another country and not knowing the health or state of mind of the child left me wondering if we made the right decision. fter praying about it for some time, Carmelle and I decided to proceed with the adoption. We also wanted to adopt an older child instead of an infant because older children tend to be left behind. ll in all, it took about a year to complete the documents, interviews and governmental approvalsnd off to China we went.

It been 19 years since we made the long trip to China to adopt our daughter, Ivy Zhuhua. s I look back, I would never have imagined how difficult the journey would be becoming parents of an adopted child. t wasn long after we adopted Ivy that we began to see unusual behavior and poor coping skills. After countless trips to doctors and specialists, Ivy was diagnosed with Asperger syndrome. hen I was made aware of her diagnoses I was questioning whether I could be a good father. I made a commitment to God that I would trust in Him to help me do whatever it takes to help Ivy have a normal life. oday, Ivy is a vibrant, young women full of life. She is learning to cope with her disability and is maturing every day.

Many people who know what Carmelle and I have been through have asked me if I would go through the adoption process again. believe as God people we have a responsibility to care for orphans no matter the difficulty one must endure. Every person deserves to be loved, and I would not hesitate to do it all over again.Some reading this might have second thoughts about adopting. would say to you: What price can you place on a human life?

Ie always wondered what would have happened to Ivy if we did not adopt her. thought of the worst things, but I do know for us adopting Ivy, God has given her a second chance and an opportunity to live life to the fullest. t has been such a joy being Ivy Dad and would encourage anyone contemplating adoption to not let the unknown stop you from fulfilling your dream. Trust me, the journey has been well worth it. 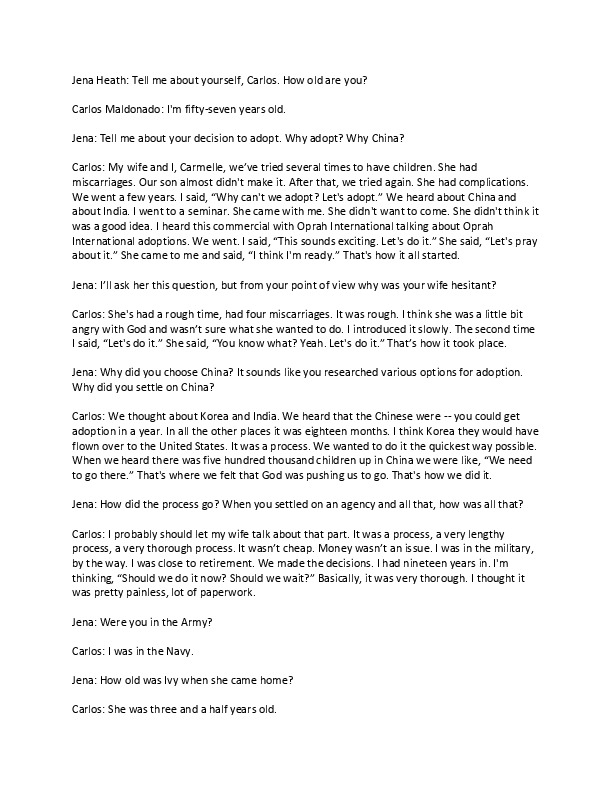